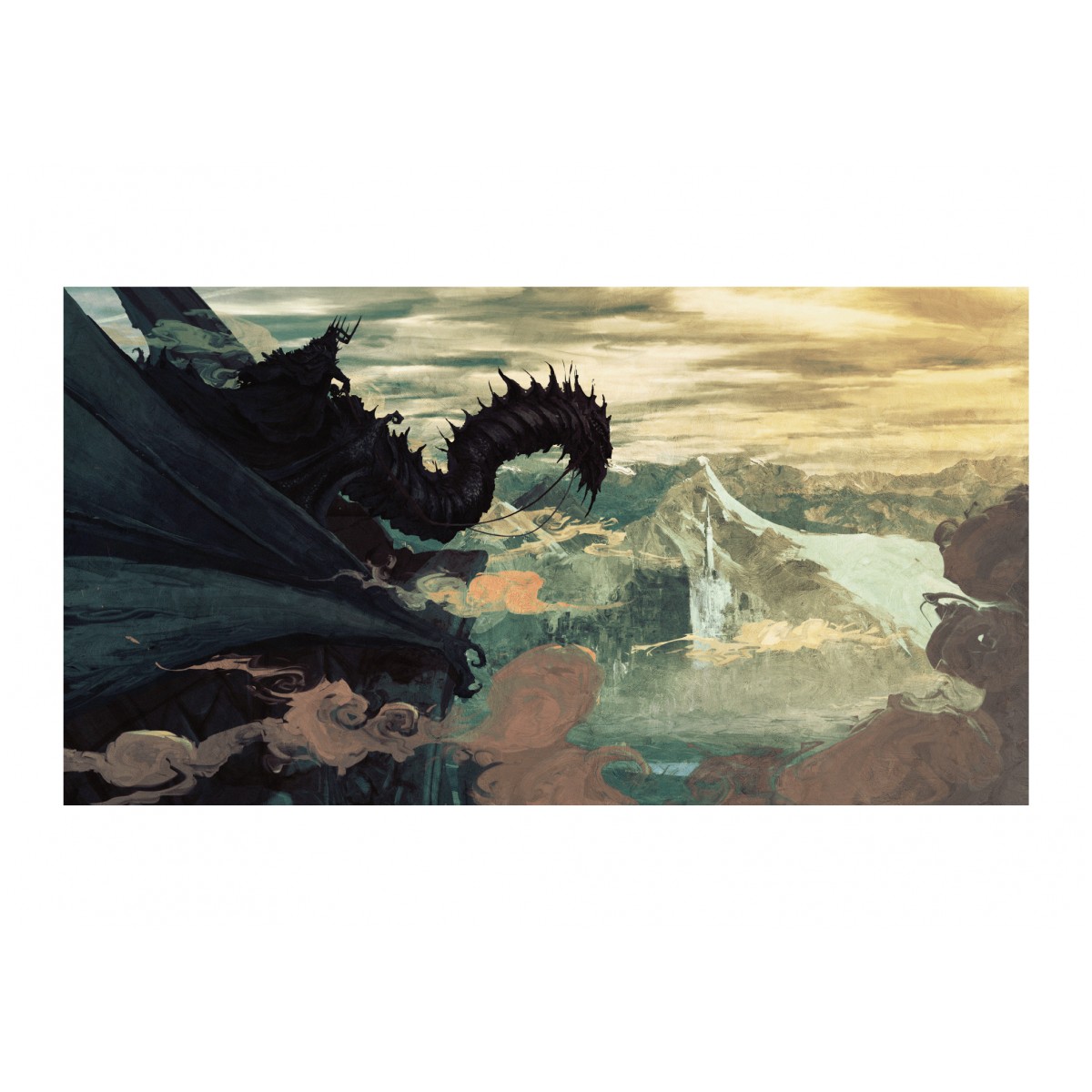 The Witch King of Angmar by Anato Finnstark

The Witch King of Angmar

Here comes a supeeeerb illustration by Anato Finnstark inspired by the universe of The Lord of the Rings and featuring the famous Lord of the Nazgûl, Sauron's second-in-command in the second and third age.

The evil Witch King of Angmar, riding his fellbeast, a gigantic wyvern-like creature, is ready to swoop down on the Pelennor Fields which (spoiler alert!) will see his final downfall. The city of Minas Tirith is but a mere silhouette, yet strong and mighty, the white tower of Ecthelion, siege of the throne of the kings of Gondor, standing out from the mountain background. The whole composition is a moment frozen in time before the battle begins...

The true identity of this devilish creature is unknown. Once a mortal king of men, he was corrupted by one of the nine Rings of Power, becoming an undying wraith in the service of Sauron. After Sauron's defeat by the Last Alliance, he eventually reappeared to found the evil realm of Angmar, where he gained the epithet "Witch-king" and ruled for almost seven centuries until the kingdom of Arnor was conquered.

The Witch-king returned to Mordor to facilitate Sauron's return to power, then took Gondor's city of Minas Ithil and refortified it as the fearful Minas Morgul, and there snuffed out the line of kings of Gondor too. He led Sauron's armies in the War of the Ring, stabbed Frodo Baggins on Weathertop during the first months of Frodo's venture out of the Shire to Rivendell, and at the Battle of the Pelennor Fields he broke the gates of Minas Tirith and killed King Théoden of Rohan.

Chief lieutenant and greatest servant of the Dark Lord across over 4000 years of Middle-earth history, he was a mighty war leader and an undying sorcerer of incomparable fear and dread. In his hour of triumph at the Pelennor, however, he was killed by the hobbit Meriadoc Brandybuck and Éowyn, niece of Théoden, at the end of the War of the Ring.

For more info about him, check out the One Wiki to rule them all or (re-)read the books by Tolkien ! :)

For those of you who don’t know Anato, he's a French artist who's been working in illustration and concept-art for several years now and has worked on a lot of licences including Magic: The gathering or Dungeons and Dragons.

In a unique and dark style, using a limited color palette and playing a lot with shadows, Anato manages to create heavy and beautiful atmospheres. It is clear that he has understood the essence of the work from which he drew inspiration and has managed to capture it in this digital illustration.

The sale of The Witch King will take place from Friday, February the 4th, 2022 at 6:00 pm (French time)! You will then have until Monday, February the 7th at 5:59 pm (that's 12:00 pm in NYC and 09:00 am in California!) to get this unique print! Once the timing is over, we will stop the sales, and the print will be printed and numbered according to the number of sales!

Shipments will be made in reinforced cardboard tubes, and we will of course take all the usual care that we put in sending our books. All packages will be insured and tracked (if your country allows it!).

For more information about the project, please visit Caurette.com or Geek-Art.

REJOICE! Geek-Art and Editions Caurette are very happy to continue their partnership, for the greatest pleasure of art lovers! Here is the third copy of our Time Limited Art Prints (TALP) collection! We didn’t come up with the idea, but let us explain how it works: instead of printing a fixed number of posters and then sell them in only a few minutes, we’ll put an art print on sale for a few days and then print however many were sold during the said timeframe. That way, no need to stress out if you have a slow Internet connection or if you are not available in the minutes following the launch of the print. Everyone can get their hand on a copy!

All art prints will be signed by the artist, numbered according to the number of sold copies and provided with a signed certificate auf authenticity by the artist.